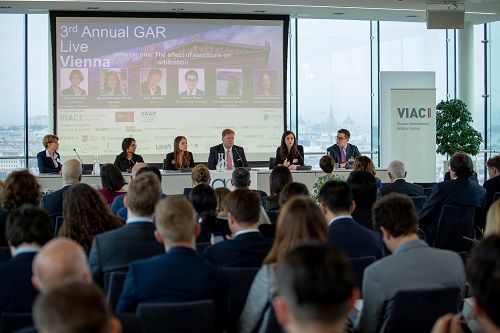 The conference, which attracted over 150 delegates, was co-chaired by Stefan Riegler, head of arbitration at Wolf Theiss and a board-member of the Austrian Arbitration Association; VIAC Secretary General Alice Fremuth-Wolf; and Eliane Fischer of Freshfields Bruckhaus Deringer, member of Advisory Board of the Young Austrian Arbitration Practitioners (YAAP).

The day opened with a session moderated by Eliane Fischer on the topic "The effect of sanctions on arbitration" including contributions from Mercédeh Azeredo da Silveira of AZHA Avocats, Jann Siefken of ams AG, Andrey Panov of Norton Rose Fulbright, Aasiyah Patel of International Chamber of Commerce and Delphine Wietek, Independent Expert.

Session 2 "The GAR Live Inquisition - are international arbitration counsel at home in big law firms and arbitrators in boutiques?" repeated a hearing of a US Senate Committee with a number of witnesses being  "grilled" by a panel of GAR live Inquisitors.

In the afternoon, the Q&A session focused on due process paranoia and corruption. The esteemed panel consisted of Nicole Dolenz of Orrick, Herrington & Sutcliffe and José Feris of Squire Patton Boggs, who discussed questions submitted by the audience in advance, moderated by Alice Fremuth-Wolf.

The final session took the form of a debate on the motion "This house believes that the Prague Rules are a waste of time."

Stefan Riegler moderated the battle, with Alexey Anischenko of Sorainen and Michelle Bock of WilmerHale arguing against the motion while Eléonore Caroit of LALIVE and Nicholas Peacock of Herbert Smith Freehills were defending it. The panel of judges was made up of Christian Aschauer, Independent Arbitrator, Anne-Karin Grill of Vavrovsky Heine Marthe and Francesca Salerno of Legance. Ultimately, the audience decided not to give leave to the motion.

Following the closing remarks, all delegates were invited to a cocktail reception with a marvelous view from the roof-top of the Christoph-Leitl-Lounge in the premises of the Austrian Federal Economic Chamber and VIAC.