What is investment arbitration?

Investment arbitration is a procedure for resolving disputes between foreign investors and host states. The promotion of investment and thus the economic development of the contracting parties is an intended effect of investment protection agreements. An appropriate legal framework with a minimum of legal certainty is essential for private investments. This also includes the availability of international dispute settlement mechanisms that offer legal protection and contribute to a depoliticization of investment disputes.

In the event of a dispute, access is therefore provided to independent and qualified arbitrators who, in accordance with various standards of protection granted under international agreements, decide on the dispute and render an enforceable award. Thanks to the 1958 New York Convention on the Recognition and Enforcement of Foreign Arbitral Awards, an arbitral award is recognized and enforceable in most countries of the world.

As in commercial arbitration, the agreement to arbitrate may provide that arbitration proceedings will be administered by an institution such as VIAC.

VIAC was established by the Austrian Federal Economic Chamber in 1975 and has since then been an independent and neutral institution for the administration of commercial disputes, focusing on the CEE/SEE and CIS region. The expansion of the portfolio to include the administration of investment disputes takes account of international developments and takes account of Austria's special role as a neutral place for dispute resolution and Vienna in particular as a center for international exchange and negotiation. With its historically established position in Central and Eastern Europe, VIAC may be an alternative to States and investors from this area to ICSID and proceedings in Washington.

The Vienna Investment Arbitration Rules are intended to apply by agreement to the arbitration of investment disputes arising under a contract, treaty, statute or other instrument and involving a State, a State-controlled entity or an intergovernmental organization.

VIAC thus administers investment proceedings when this has been provided for in one of the above instruments and the dispute involves a state, a state-controlled enterprise or an intergovernmental organization.

Unless the parties have agreed otherwise, investment arbitration proceedings are confidential. However, as public interests are at stake in such proceedings, a certain degree of transparency is required. The Vienna Rules on Investment Arbitration therefore expressly provides for the participation of amicus curiae, the publication of certain limited information, and the publication of anonymized summaries of awards.

To increase transparency in investor-state arbitration, the UNCITRAL Rules on Transparency in Treaty-Based Investor State Arbitration have been adopted. Subject to an agreement of the parties, these Rules require that party briefs, expert reports, procedural orders and awards must be made public and hearings must be held in public. For this purpose, VIAC refers parties to the UNCITRAL Transparency Registry.

Please click the following flow-chart to see how investment proceedings will be conducted under the Vienna Investment Arbitration Rules 2021. 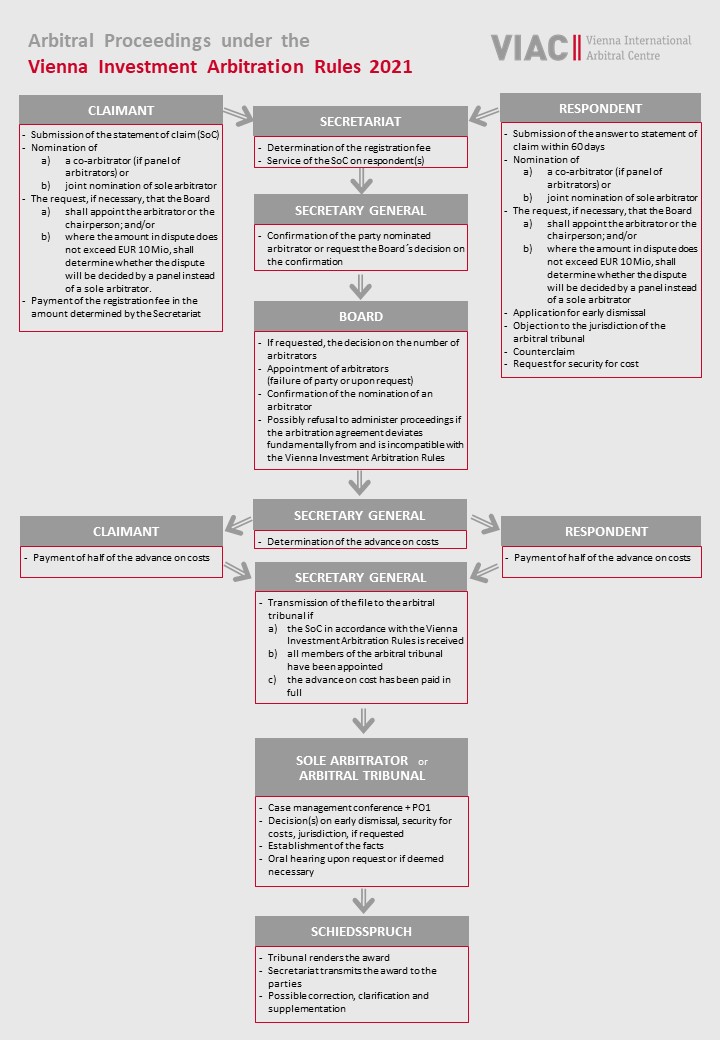